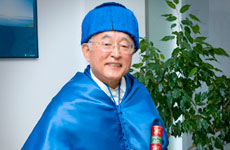 Takashi Asano was born in Sapporo (Japan) in 1937. In 1963, he moved to the United States, and he is currently Professor Emeritus of the Department of Civil and Environmental Engineering at the University of California.

In the late 1970s, Asano led research on water reuse that ended in what is known as the California Water Recycling Criteria, one of the cornerstones of most international water reuse projects.

One of the focal points of this researcher has been the poor countries of the arid and semi-arid regions, where water scarcity affects the possibilities of development and threatens the health and quality of life of the populations. His work has been aimed at promoting the development of projects for the efficient and integrated use of water, in cooperation with various international organizations such as the World Bank, FAO and WHO.

With more than 120 international articles and 22 books or chapters of books, some fundamental in the field of reuse, has placed special emphasis on the training of young university students in water science and engineering. The great virtue of Asano has been his promotion of the understanding of the water problem and the search for participatory solutions.

In addition to the 2001 Stockholm Water Prize he has received another fourteen awards. These include:

He has excellent relationships with the members of the Research Group of Environmental Technologies of the University of Cadiz. He has published, both nationally and internationally, with members of the group and continually advises them on any issues necessary. Through Asano, numerous doors in the scientific field have been opened to the Environmental Technologies group, allowing its members to be in contact with the most prestigious worldwide researchers in the field of water reuse.