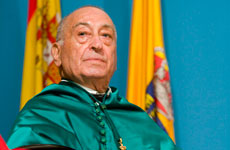 D. Nicolás Redondo Urbieta, was born in 1927 in Baracaldo (Vizcaya) in the heart of a Basque family with a deep unionist and socialist tradition. From the age of 15 he worked as a metalworker in the National Company of Sestao (nowadays Astilleros Españoles), from which he was dismissed after 32 years of service for his trade union activity.

An active militant of the UGT trade union and the Socialist Youth, he suffered reprisals during the Franco regime.

Among other distinctions, Redondo holds the Grand Cross of the Order of Civil Merit, the Gold Medal of Merit in Labor, the Cross of Commander of the Order of Merit of the Federal Republic of Germany and the Order of Constitutional Merit, being Official of the Legion of Honor of the French Government and Honorary Doctorate by the Polytechnic University of Valencia.