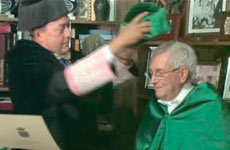 Mr. Marcelino Camacho Abad was born in Osma La Rasa, Soria, in 1918. He is founder and first secretary general of Comisiones Obreras (CCOO) between 1976 and 1987, and communist deputy for Madrid between 1977 and 1981.

On 2nd of February 1935 he joined the Communist Party of Spain (PCE) and later the General Union of Workers, where also belonged his father, guard at La Rasa Station (Soria). He fought on the Republican side during the Spanish Civil War (1936-1939) being tried and sentenced to forced labor in Tangier after the Francoist victory.

In 1957, after being pardoned, he returned to Spain to carry out his profession of metallurgical worker in Perkins Hispania. He was elected representative of the workers of his company and was one of the promoters of Comisiones Obreras (CCOO), a union of communist inspiration infiltrated in the Vertical Trade Unions of the pro-Franco regime. Due to his union and political activities he was imprisoned in 1967, spending nine years in the prison of Carabanchel.

He directed CCOO until 1987, when it became the first Spanish trade union center and convened the first general strike in 1985 to the government of Felipe González. In 1987 he occupied the honorary position of President, being replaced in the position of secretary general by Antonio Gutiérrez. However, in 1995 he resigned as President. He is still active in the PCE and is a member of his Federal Committee.

He has received, among other distinctions, the Great Cross of Civil Merit, the Order of Constitutional Merit, the Gold Medal for Merit in the Work and, in addition, he is Honorary Doctorate by the Polytechnic University of Valencia.