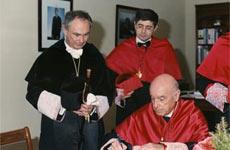 Lawyer and Professor of Administrative Law since 1952, first in Salamanca and since 1954 in Seville. He was Dean of the Faculty of Law of Seville from 1965 to 1967 and rector between 1971 and 1975, position that he occupied by election in the first votes of the Hispalense University. His work during these years was not easy, since he had to live the moment of university emergence, which resulted in the massification of the centers, coinciding with what was intuitively the last years of the dictatorship.

In 1976, he founded the Social Liberal Andaluz Party, with which, integrated within the Union of Democratic Center, he started in the political career. Professor Clavero Arévalo was appointed Minister of the Regions during the first government of democracy. To him it is due in large part the configuration of what was the Spanish autonomous map, that gave rise to the present organization in autonomous communities. Of this political stage are works like Forjar Andalucía, Ser Andaluz and España, desde el centralismo a las autonomías. Subsequently, and until 1982, he was Minister of Culture during the first constitutional legislature.

The defense of his idea of ​​full political autonomy for Andalusia in the framework of the State of Autonomies leads him to resign from his position, in addition to making him one of the main diffusers of this message. For this reason, in February 1999, he was awarded the distinction of Favourite Son of Andalusia.

After leaving politics, Manuel Clavero returned to the classrooms, where he worked until his retirement in 1991. At the university, he has divided his work between teaching and research. The fruit of this last one is distributed in numerous works published in books and in the most prestigious magazines of Law, of some of which is member of the Editorial Board. His works are part of the generation of the Revista de Administración Pública, a group of professors who worked around the 1950s and who have been the most brilliant generation of students of Administrative Law. The Forced Expropriation Act (1954) or the Administrative Procedure Act (1958) are some of the “works” of these teachers.

Among its first publications we can emphasise Consecuencias de la concepción de Derecho administrativo como ordenamiento común y normal, where he advances in the definition of this discipline, differentiating it of the civil Law; La doctrina de los principios generales del Derecho y las lagunas del ordenamiento jurídico or Ensayo de una teoría de urgencia en Derecho administrativo, which has been a very practical study for the application of administrative law by the Courts of Justice. Already in the sixties, Clavero Arévalo publishes Personalidad jurídica, Derecho general y Derecho singular en las Administraciones autónomas, La inalienabilidad del dominio público or La recuperación administrativa de los bienes de las corporaciones locales. The importance of Professor Clavero Arévalo’s work lies not only in their usefulness but also in the opening of lines of research in the field followed by many of his disciples.