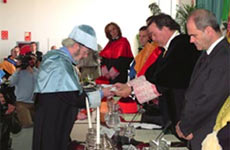 José Manuel Caballero Bonald was born in Jerez de la Frontera in 1926, although with the arrival of the Spanish Civil War, the writer spent seasons in Sanlúcar and in the Sierra de Cádiz. He began his higher education in Cadiz, where he studied merchant marine in the old School of Nautical of the capital. From this time are also his first poems and his contacts with the members of the magazine Platero, of which he was co-founder.

Subsequently, he set aside his nautical studies to study Philosophy and Literature, first in Seville and later in Madrid. There he serves as deputy director of the magazine Papeles de Son Armadans. It will also be in Madrid where the group of 50’s -Blas de Otero, José Agustín Goytisolo, Ángel González, José Ángel Valente, Jaime Gil de Biedma, Alfonso Costafreda, Carlos Barral – with whom he traveled to Collioure to perform a tribute to Machado.

He has worked as a professor of Spanish Literature at the National University of Colombia and at Bryn Mawr College. He participated in the Lexicography seminar of the Royal Spanish Academy, where he remained until 1975. He has also been literary director of Ediciones Júcar and has given numerous seminars and collaborated in congresses in various countries. In 2003 he writes the scripts of the 250 chapters of the documentary series Andalucía de Cine, produced by the RTVA.

He has won the Boscán and Critic awards for his work Las horas muertas, Biblioteca Beve for his first novel, Dos días de setiembre, Ágata ojo de gato was awarded the Barral Prize (which he renounced) and Critique, En la casa del padre received the Plaza y Janés prize; he has been awarded the gold medal of the Círculo de Bellas Artes and the Julián Besteiro Prize for Arts and Literature, as well as other awards that are a recognition of his quality as a novelist and poet.

José Manuel Caballero Bonald is Favourite Son of Andalusia (1996), of the Province of Cadiz and of Jerez.