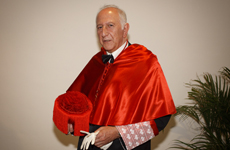 With our entry into the EC. In 1986, Gil Carlos Rodríguez Iglesias was named the first Spanish Judge in the Court of Justice of Luxembourg, where he has played a good part of his professional life. In this judicial function he has been Judge, but also President of this European Institution, from 1994 to 2003, being elected and re-elected by his colleagues for this presidential function on three occasions. At the end of his third term in 2003 he was reintegrated into Spanish university life. His legacy as Judge and President of the European Court for almost 18 years, and his work advocating a generous interpretation in favor of integration and European citizens, has been widely recognized in Europe, as shown in the Homage Book Une communauté de droit. Festschrift für Gil Carlos Rodríguez Iglesias, Berlin 2003, book written in the languages ​​that he dominates, Castilian, English, French and German.

As an academic specialist in European Union law, he has devoted a large part of his scientific output to the role of European law and its relationship with national laws and the Constitutional and Supreme Courts of the Member States, in particular as regards interpretation and Judicial application, and protection of human rights.

Linked to the Advisory Council of the most prestigious legal Journals of European Law, he is Co-Director of the Journal of European Community Law, former Magazine of European Institutions, which he helped to found in 1974.

In 2003 he won the Walter Hallstein Prize for his contribution to the European integration process. In 2005, the Committee of Ministers of the Council of Europe entrusted him the Chair of the Group of Wise Men to examine the long-term effectiveness of the monitoring mechanism of the European Convention on Human Rights

He is currently Director of the Elcano Royal Institute and President of both the Spanish Association for the Study of European Law and the International Federation of European Law.

He is Honorary Doctorate by the Universities of Oviedo, Turin of Italy, Babes-Bolyai of Romania, Saar in Germany, and San Clemente of Ohrid in Bulgaria.