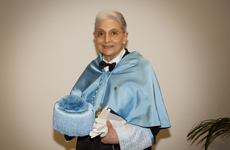 Clara Eugenia Lida born in Buenos Aires, currently resides in Mexico City, where she has been teaching in the last decades. Daughter of the philologist Raimundo Lida, she studied history at Brandeis University (Massachusetts, USA), where she graduated in 1963. The following year she obtained a Master’s degree in History in El Colegio de México with Silvio Zavala. And between 1965 and 1969 she obtained his Ph.D. in History and Literature at Princeton University with Vicente Llorens.

In recent years she has focused on the consolidation of a study centre for the comparative analysis of the recent history of Spain and Latin America. The result of this is the creation in 2002 of the Mexico-Spain Permanent Seminary in El Colegio de México, where she, from various perspectives, presents and discusses research on the relations between the two countries in the 19th and 20th centuries. Consolidating this line was founded the “Mexico-Spain Chair”, which was inaugurated on the academic year 2006-2007, and is sponsored by Universia-Banco de Santander.

Clara Lida is the author or compiler of several dozen specialized books and more than a hundred articles and book chapters in scientific publications in her fields of research. The quotations from his publications exceed a thousand.

For her contributions to the history of Spain and the study of the Spanish in Mexico, in 2006 she was decorated with the “Order of Civil Merit” awarded by the Spanish State for its academic merits