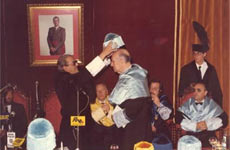 Antonio Dominguez Ortiz, a historian specialized in the Spain of the 16th, 17th and 18th Centuries, a writer and professor with a long career, was born in Seville in 1909. He studied in his hometown and did his doctorate in Madrid. He was a teacher at the Murillo High School in Seville until 1940, when he joined the faculty. He spent most of his academic life in secondary schools in Cadiz, Granada and Seville, where he collaborated with the Hispalense University during the years of the Second Republic and with the Labour University, in the fifties.

His vocation for research became evident when, under the direction of Eloy Bullon, he carried out his doctoral thesis on Documentation of Interest for the Geography of Spain existing in the Manuscripts Section of the National Library of Madrid. His first printed work of importance in the field of History was Orto y Ocaso de Sevilla (1947). In this study, Antonio Dominguez Ortiz contributed to the history of Cadiz by being the first historian emphasizing Sanlucar and Cadiz as the most important focuses of traffic from the Indies in the second half of the 17th Century.

His contributions can also be found in magazines such as Archivo Hispalense, Anuario de la Historia del Derecho Español, Estudio de Historia Social de España, as well as in collective works such as: Historia de España y America social y economica, Historia de España or Historia de Andalucia, for which he not only wrote many of the chapters, but he also directed.

His name is progressively becoming more popular in international forums of the speciality. He was invited as a guest speaker for the 3rd Congress of Spanish and Portuguese Studies, the Council for European Studies, the Congress of History of Toulouse, Bordeaux, London, etc. He was appointed as correspondent of the British Academy and numerary of the Royal Academy of History in 1974. Among the many awards he has received, the Prince of Asturias of Social Sciences (1982) was particularly important.

He has been Favourite Son of Andalusia since 1985. Dominguez Ortiz was awarded the Honorary Doctorate by the University of Cadiz, the Complutense of Madrid, the Central of Barcelona, ​​the University of Bordeaux and the universities of Granada, Seville and Cordoba. Perhaps Dominguez Ortiz is the man who has most contributed to the knowledge of Spain in the sixteenth, seventeenth and eighteenth centuries.