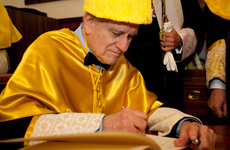 Professor Valentín Fuster Carulla was born in Barcelona in 1943. He holds a PhD in Medicine and Surgery from the University of Barcelona and spent several years in the Mayo Clinic. In 1981, he began working at Mount Sinai Medical School and was appointed chief of cardiology. From 1991 to 1994 he was Professor of Medicine at Harvard University and Head of Cardiology at the Massachusetts General Hospital. In 1994, he returns to Mount Sinai as director of the Zena and Michael A. Wiener Cardiovascular Institute, where he is appointed director of cardiology. He is currently general director of the National Center for Cardiovascular Research (CNIC) in Madrid.

He has served as president of the American Heart Association, the World Heart Federation and a member of the National Academy of Science and Medicine of the United States, as head of the Committee on Prevention of the Global Epidemic of Cardiovascular Diseases. He is an honorary doctor of 26 universities all over the world.

He has published more than 800 articles on coronary heart disease, atherosclerosis and thrombosis and he is editor-in-chief of two books of worldwide reference cardiology: The Heart (previously edited by Dr. J. Willis Hurst) and Atherothrombosis and Coronary Disease (with Dr. Eric Topol and Dr. Elizabeth Nabel). He is the editor-in-chief of the journal Nature Reviews Cardiology.