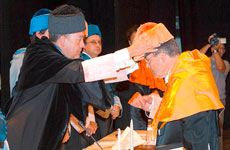 President of the Institute of Spain and Emeritus Professor of Sociology at the Complutense University of Madrid, he was born in La Línea de la Concepción (Cadiz) in 1931. He holds a PhD in Political Science, a degree in Law and Social Sciences, and as a journalist. The most prominent figures in Spanish sociology, with greater international projection and whose contribution has been basic for the institutionalization and development of this discipline in our country.

In fact, in its Department of the Complutense University (which he run in 1967), the creation of the first Faculty of Sociology that opens in Spain emerges and is promoted. Master and referent of several generations of Spanish sociologists, he has left his mark through innumerable initiatives, responsibilities, scientific researchs and publications. He has played a vital role in the promotion of applied sociological research in Spain, as founder and first director of the Institute of Public Opinion, an antecedent of the CIS, from which he promoted the conduct of large sociological surveys.

His work can be grouped in six thematic areas: family studies, those related to population analysis and demographic policy, those related to social indicators, studies on public opinion, work on social change and, in recent years, on trends; as well as the academic works on Sociology, especially the Dictionary of Social Sciences of UNESCO, the Treaty of Sociology and his introductory work “La Sociología Científica Moderna”.

Regarding his public responsibilities, he belonged to the Office of Social Affairs of the United Nations Secretariat in New York and was a member of the Board of Directors of the European Centre for Coordination and Documentation in Social Sciences in Vienna. He has received numerous awards: Honorary Medal of the Complutense University, Grand Cross of the Order of Alfonso X El Sabio and National Prize in Sociology and Political Science 2003. He is an academic at the Royal Academy of Moral and Political Sciences, of the European Academy of Sciences, Arts and Humanities (Paris) and the Scientiarum et Artium Europaea Academy (Salzburg) and Honorary Doctorate by the National University of Distance Education.