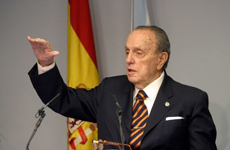 Born in Villalba (Lugo), he obtained a doctorate in Political and Economic Sciences from the University of Madrid, and began his political activity in 1951 as General Secretary of the Hispanic Culture Institute.

During the dictatorship of Franco, he held the positions of national councilor of the movement and attorney in Cortes, although his most outstanding position was that of Minister of Information and Tourism – between 1962 and 1969. At the head of this portfolio, he elaborated the Law of Press and Printing and the Advertising Statute. In 1973, and during two years, he was ambassador of Spain in the United Kingdom and Northern Ireland.

In December 1975 he returned to politics to become part of the first government of transition as vice president for Home Affairs and Minister of the Interior. Between 1977 and 1978 he was a member of the paper that drafted the current Constitution. In those years he founded Popular Alliance (AP). In 1979, the III Congress of AP was held, where he was elected president of the party.

He presided, being the oldest senator, the old table in the constitution of the Upper House, which he used to remember his idea of ​​reforming the Senate in a sense of autonomy. Seat he retained until, in September 2011, he retired from active politics. He passed away on 15th of January 2012.