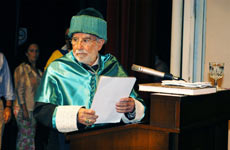 Carlos Castilla del Pino was born in San Roque on the 15th of October 1922. He never forgot the province of Cadiz and more specifically the Campo de Gibraltar area in his work. This link can be seen in the acknowledgments and honours he has received, such as the title of “Universal Andalusian” granted by the Regional Board of Andalusia in 1985 and the “Favourite Son of San Roque” also granted in 1985 by the Town Council of the said town. Since 1981 he has been an Honorary Member of the Campogibraltareños Studies Institute and since 2002 he has been “Favourite Son” of the Province of Cadiz.

In direct connection with the UCA, he has participated as a speaker or lecturer in conferences, seminars, courses, etc., organized internally. The most significant example of this is the coordination of the Summer Courses of the UCA in San Roque, for over twenty years. Its Behavioural Anthropology seminar brings accredited specialists to San Roque every year. The subsequent publication of the materials has boosted the presence of our university worldwide.

The scientific relevance of the trajectory of Carlos Castilla del Pino speaks for itself:

The wide recognition of his scientific figure in the national field, is projected beyond our borders. Castilla del Pino has been a speaker at dozens of international congresses of Psychiatry and Psychology.

He is also a member of the most important psychiatric societies in Argentina, Peru, Colombia, Dominican Republic, etc. and he has been Visiting Professor of the Universities of Aarhus, Bogota, Buenos Aires, Caracas, Copenhagen, Götitingen, Liège, Marseille, Midelbury, Milan, Sheffield, etc.

He was also awarded the distinctions of “Adoptive Son” of Cordoba; Gold Medal of the Circulo de Bellas Artes of Madrid in 2002; Gold Medal of Menendez Pelayo International University, Santander in 2002 and Professor Emeritus of the Andalusian School of Public Health in 2003.

In June 2003, he was elected Academic of the Royal Academy of Language, with a large margin of votes, to fill the vacancy left by Camilo Jose Cela. He was presented to the Academy by Jose Luis Pinillos, Jose Luis Sampedro and Emilio Lledo. In the words of the President of the Academy: “Castilla del Pino not only has an important history of books in his speciality and medicine in general, but has also realized literary creation.

The figure of Castilla del Pino, therefore transcends the limits of a scientific discipline, to become a cultural landmark of contemporary Spain. It can be said that psychiatry in our country would be impossible without his contributions and, likewise, he has projected his name and his activity as a teacher, essayist and lecturer in all cultural areas.