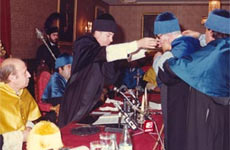 The master Andrés Segovia was born in Linares (Jaén) in 1893, where he lived near a guitar shop, so he commented that “the guitar effluvia caressed my cradle.”

Moved his family to Granada, there begins his self-taught guitar learning, only supported by a few musical studies at the Music Institute of Granada. His will and demand allowed him, despite his few years, to discover the enormous possibilities of the instrument.

In 1910, when he was only 16 years old, he offered his first guitar recital at the Centro Artistico de Granada, and obtained encouraging critiques that encouraged him to continue giving recitals throughout Andalusia. His presentation came in 1913, with his performance in the Ateneo de Madrid. His tours in Spain follow, despite his youth, and in 1919 he moves abroad for the first time: first to Latin American countries, later to Europe. In his eagerness to expand the repertoire of guitar, at that time very meager, he made some composer friends begin to write for his instrument (among them, Villalobos, Rodrigo and Ponce). In 1924 he triumphs in Paris, fascinating the public and critic. His concert in New York prompted the following New York Times commentary: “He makes the color of half a dozen instruments out of the guitar … A rare New York audience was so unanimous and warm in giving its approval and acceptance”.

Andrés Segovia expands his repertoire thanks to his research work, which leads him to study and adapt works of the most renowned vihuelists. His adaptations include those made from works by Johann Sebastian Bach. The premiere of the Chacha de Bacha, transcribed by him, achieved a memorable success in Paris. His musical tours take him to places as far away as Japan or Australia, an activity that does not leave even passed his 90th birthday. His love of reading led him to begin, with more than 70 years, a book of memories entitled “La guitarra y yo” (The guitar and I). To Andrés Segovia the guitar owes being rescued from the folkloric level it was in and the expansion of its repertoire. He wanted to raise it definitively, turning it into a polyphonic instrument, and he succeeded. In addition, he has influenced those responsible for the best academies and conservatories in the world to open the teaching of this instrument, offering himself to give master classes in Los Angeles, Siena, Santiago de Compostela, Granada, Geneva and even in The Metropolitan Museum of Arts in New York.

His tireless work earned him the Cross of Isabel the Catholic, the Cross of Alfonso X the Wise, the Medal of Merit to Work, the Medal of the Fine Arts, the National Music Award and other awards in Spain and abroad. In 1981, he was imposed the noble title of Marquis of Salobreña. Master Segovia was an academic of several Academy of Fine Arts (Rome, Stockholm, Madrid, Seville, Granada …), and Honorary Doctorate by the Universities of Oxford, Santiago de Compostela, Autónoma de Madrid, Granada, Loyola, North Carolina, Florida, And by the International College of Los Angeles, as well as by the University of Cadiz. He died in Madrid on the 3rd of June, 1987.