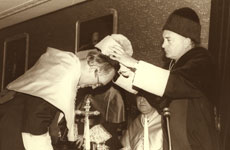 Professor Dietrich E.W. Trincker was born in the city of Insterborg in East Prussia in 1923. He followed Medicine, Natural Sciences and Physics courses at the Universities of Köningsberg, Danzing, Hamburg and Greifswald, but his studies were interrupted by World War II, during which he was drafted as a nurse, taken prisoner and finally released.

His research and academic activity began at the Greifswald Institute of Physiology. However, in 1954, because of his participation in a university revolt against the communist government of the German Democratic Republic, he had to flee with his family and leave this work. In 1955 he was appointed Privat Dozent at the University of Erlangen, where he worked at the Physiological Institute. Eight years later he moved to the University of Kiel to organize and direct the Institute of Neurophysiology and Biocybernetics of this institution.

Professor Trincker’s university career ended as Professor of Special Physiology at the Ruhr Universität in Bochum. Nevertheless, his research work continues today: in his eighties, he is directing the drawing up of a Treaty of Comparative Physiology.

During his early years of research, he devoted himself to the study of Physiology, but soon focused on the CNS, specializing in vision, hearing and balance. His main fields of research are linked to subjects as diverse as the Neurophysiology of acoustic and vestibular mechanoreceptors; the elaboration of sensomotor information and the programming of oculomotor and sensomotor responses; thermoregulation and thermo-transfer systems; Aerospace medicine; or medical psychology. Among his contributions are the description of the dome of the ampular crests of the posterior labyrinth; the recording of the resting and action potentials of the sensory cells of the ampullary crests; and the morphological and functional demonstration of the vestibular efferent system.

As a result of his activity, Professor Trincker has published more than 200 articles in specialized journals in Physiology, Biology and Cybernetics, numerous monographs, and he has participated as a speaker in conferences and symposia of Neurophysiology in several European universities. The Spanish Society of Otorhinolaryngology and Cervicofacial Pathology has recognized the contributions of Dietrich E. W. Trincker by naming him an Honorary Member.

The Professor also stands out for his extensive humanistic training. His mastery of Latin and Greek led him to dominate, besides his language, languages ​​such as English, French, Spanish and Russian, besides speaking Danish, Swedish, Italian, Polish and Czech. Perfectionist, patient and generous with his collaborators, on more than one occasion he allowed his colleagues to sign a project as primary author, following one of his maxims: “It does not matter who signs the work, what matters is that the work is done well.”