The website of the University of Cádiz uses its own and third-party cookies to carry out analysis of use and measurement of traffic, as well as to allow the correct functioning in social networks, and in this way to improve your browsing experience.

The website of the University of Cádiz uses its own and third-party cookies to carry out analysis of use and measurement of traffic, as well as to allow the correct functioning in social networks, and in this way to improve your browsing experience. 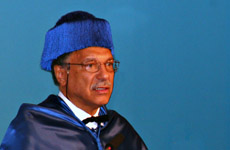 Subsequently, for two years, he became part of a German-Indonesian project with a view to the introduction of new fishing gear. In 1979, he obtained a PhD in Fisheries Biology and Biological Oceanography from the University of Kiel. From here, he works for 15 years at the International Center for Life and Management of Aquatic Resources (ICLARM) in Manila (Philippines). Pauly helped design, implement and refine the methods that use frequency data rather than the age of the fish to estimate the parameters of fishery statistics such as growth and mortality, basic parameters for fisheries assessment .

He currently works at the Fisheries Center of the University of British Columbia (Vancouver, Canada), where he arrived in 1994 and was the director. Pauly helped develop two important projects: ELEFAN and FishBase. ELEFAN makes it possible to use height frequency data to estimate fish growth and mortality. FishBase is an online information and fishery encyclopedia that includes information on more than 30,000 different species. Both projects received worldwide attention and through multiple updates and additions, they are still prominent in fisheries biology, and their use is obligatory for anyone working in the field of fisheries.

From its beginnings on the management of tropical fisheries, it evolved towards the analysis of trends in world fisheries and the conservation of fishery resources. From the 1990s, Pauly’s research focuses on the effects of overfishing, from a new perspective that has changed the established paradigms, and that has led to his work being the most cited in his field of study.

Professor Daniel Pauly is a world authority in the study of the decline of fish stocks and the response of ecosystems to human pressure. It has developed and used new techniques that have allowed the analysis of the global impacts of fishing on marine ecosystems. It has quantified these impacts through a widely accepted “Marine Trophic Index” and has made the Ecopath model one of the most used ecosystem modeling tools. The NOAA (National Oceanic and Atmospheric Administration of the United States) has considered this model as one of the most outstanding achievements of the last 200 years.

Daniel Pauly has overseen a large number of master’s and doctoral students in the Philippines, Germany and British Columbia. This brilliant career has always been at the service of the struggle to conserve marine ecosystems. A role that also develops through the board of the organization. This activism has led him to denounce on several occasions the permissiveness of different governments with fishing techniques that – like the one of bottom-trawling – allow the capture of fish of lower trophic level fishes, to warn in several occasions that, if not remedied, in the near future “from the sea we will only be able to take jellyfish and soup of plankton”. It has also repeatedly denounced the EU’s fisheries policy, which it calls “a farce”, and has called for marine reserves, given the limiting situation it points out that marine ecosystems suffer.

He has received numerous honors, among others: the International Cosmos Prize in Japan in 2005, the Volvo Enviromental Prize in Sweden 2006, the Ramón Margalef in our country in 2008 and the Nierenberg Prize for Science in the Public Interest in USA in 2012, as well as Honorary Doctorate by 6 Universities and Member of several Academies and Societies.

Pauly is a prolific writer and communicator who has published in the best scientific journals, not forgetting his role as a disseminator of a problem of broad social impact. Author of several books and more than 500 scientific articles, many of them about 35, published in the journals ‘Nature’ and ‘Science’, is considered by the most prolific and cited author in his field.

He has developed several concepts and lines of research as well as a new way of approaching an enormously complex problem such as the fishing resources and their interactions, the environment and their exploitation, which led him to be classified as one of the 50 Most influential scientists according to Scientific American, “the most prolific and cited in the world in its field of research, and critical, often controversial, with modern fishing practices”, according to Science, an “iconoclastic scientist”, according to The New York Times.