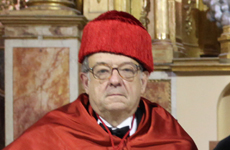 Born in Madrid, he holds a degree in Philosophy and Literature and a doctorate in Law from the Central University of Madrid. He later expanded his Philosophy in the Universities of Leuven and Paris and Comparative Constitutional Law in the European Universities of Oxford, Luxembourg and Geneva.

In 1966, he obtained the position of lawyer of the Council of State and in 1976, he was appointed technical secretary of the Ministry of Justice, position that he held until April of 1977. A year later, he was chosen president of the Commission of Justice of the Congress Of the Deputies.

He presided the Union of Democratic Center from 1980 until 1981, he left the party in 1982. From then, he belonged to Alianza Popular, formation that he would preside after the resignation of Fraga, in 1986.

In 2004 he resigned as a militant of the PP. He has been part of the Constitutional Court of the Principality of Andorra between 2001 and 2009.

He is a permanent member of the Council of State and of the Royal Academy of Moral and Political Sciences. He collaborates with the Universidad Internacional Menéndez Pelayo.